"The Author, it must be remembered, writes from his own standpoint!"
My personal "Interpretive" Lens!

Do You Have A Question?

If you have a question not covered in this blog feel free to send it to me at my email address, i.e. "snow" dot here "covered" dot here "bamboo" AT symbol here "gmail" dot here "com"

"One thing has always been true: That book ... or ... that person who can give me an idea or a new slant on an old idea is my friend." - Louis L'Amour

"Ideally, your self-defense will never get physical. Avoiding the situation and running or talking you way out - either of these is a higher order of strategy than winning a physical battle." - Wise Words of Rory Miller, Facing Violence: Chapter 7: after, subparagraph 7.1:medical
"Read not to contradict and confute; nor to believe and take for granted; nor to find talk and discourse; but to weigh and consider..." - Francis Bacon

Note: I will endevor to provide a bibliography and italicize any direct quotes from the materials I use for this blog. If there are mistakes, errors, and/or omissions, I take full responsibility for them as they are mine and mine alone. If you find any mistakes, errors, and/or omissions please comment and let me know along with the correct information and/or sources.

Reader's of this Blog

Did the Okinawans develop their own belt system?

Apparently, yes. It may have been somewhere around the 1960's or so. There is not much documentation other than the word of a few but as to the system Isshinryu there are a couple of black and white photo's of Tatsuo-san wearing what appears to be a red belt with a gold stripe through the center. The photo of Tatsuo-san is dtd around the mid-sixties, i.e. 1966 - 68.

It would be nice to see the entire belt system from the Okinawans but alas all my inquiries have been, to date, ignored. The belt system seems to have fallen out of favor since the sixties and except on rare occasions the Okinawan karate systems seem to have remained with the generally accepted belt system based on those passed to us from the Japanese Judo system by Kano Sensei. 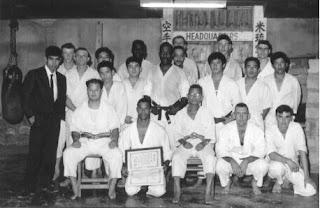 1961 era development; not fully validated from any official Okinawan source to date.

RyuTe RenMei: These type of belts were issued by the Zen Okinawa Karate Kobudo Rengo Kai. In this case "Zen" means all, as in all of Okinawa. Shortcut, All Okinawa. This organization existed between 1965 through the middle 70's. The belts were characterized by silver or gold stripes. The silver was for 1st and 2nd dan and gold for 3 through 6th dan, all on the black Obi. 7th and up was gold on red. The size of the stripe increased with the rank. ~ November 7, 2010 at 2:00pm FB Wall
Posted by Charles James
Email ThisBlogThis!Share to TwitterShare to FacebookShare to Pinterest

Monkey on Soapbox - Danger Will Robinson!