"The Author, it must be remembered, writes from his own standpoint!"
My personal "Interpretive" Lens!

Do You Have A Question?

If you have a question not covered in this blog feel free to send it to me at my email address, i.e. "snow" dot here "covered" dot here "bamboo" AT symbol here "gmail" dot here "com"

"One thing has always been true: That book ... or ... that person who can give me an idea or a new slant on an old idea is my friend." - Louis L'Amour

"Ideally, your self-defense will never get physical. Avoiding the situation and running or talking you way out - either of these is a higher order of strategy than winning a physical battle." - Wise Words of Rory Miller, Facing Violence: Chapter 7: after, subparagraph 7.1:medical
"Read not to contradict and confute; nor to believe and take for granted; nor to find talk and discourse; but to weigh and consider..." - Francis Bacon

Note: I will endevor to provide a bibliography and italicize any direct quotes from the materials I use for this blog. If there are mistakes, errors, and/or omissions, I take full responsibility for them as they are mine and mine alone. If you find any mistakes, errors, and/or omissions please comment and let me know along with the correct information and/or sources.

Reader's of this Blog

What are Tori Gates?

I have seen the "tori gate" on web sites, on training halls, and on certificates of rank but wondered if anyone was knowledgeable as to what a tori gate is. I have used it on occasion simply because I find them beautiful to look at. I have one I used for a graphic that now resides on the computer at work as a desktop theme.

I was inspired to post on this today as I read a chapter in a book that explained the tori gate with information I did not know. The tori is the gate that one passes through when entering a "Shinto" shrine. It is symbolic of Japan. Its primary function as I said is to mark the boundary to the shrine.

The tori gate also speaks in silence to those who pass under it, you are entering and now inside a sacred place and you shall behave accordingly. Traditionally that means to be quiet and behave reverently at all times.

If you visit Japan and take in one of its many attractions, a shinto shrine, it behooves you to find out the etiquette and follow it. Be on guard and diligently remain aware of the unspoken rules to keep within the countries etiquette and customs - remain respectful.

Also, you will note that the tori gate also has, often, two stone statues of  Korean dogs that guard one side and the other of the entrance. They are slightly asymmetrical, one with its mouth open, and the other closed. I don't know the significance of that part.

I am not totally sure if the tori gates are used elsewhere in Japan and/or in Okinawa. I wonder if they are used at either countries dojo entrances. I can understand if they are used that it might signify that one is entering a place they consider sacred in that a serious endeavor is taken on when you enter the dojo and that it marks the boundary of the dojo. It would also fit that when entering you must be quiet and respectful at all times, etiquette being what it is in Japan and Okinawa - of varying degrees and customary traits.

I am not sure if it is appropriate if used at dojo but I suspect it is not exactly what they are meant for when added to certificates and other such stuff. I did try my best to find information as to its usage beyond the Shinto Shrine entrance with no luck, maybe one of my readers can shed light on this. It does bring to mind that in my practice I might take a moment to consider this before using one for some purpose other than Shinto related respect for Shinto shrines. What is the etiquette for tori gates or rather what is the shikata for tori gate usage?

I did find someone's statement that said, "As I understand it the Asian tori gate represent a entrance to a sacred area, leaving the outside world and entering another... very fitting for MA." In our perception of the dojo and the act of "mokuso" it is a belief that one must leave all their outside world concerns at that point and are entering into an area of concentrated effort and study which is derived from Buddhist, Shinto and Zen origins - maybe.

Addendum: I forgot, Shimabuku Sensei (Tatsuo that is) does have a tori style gate at the entrance to his honbu dojo. I also understand that some Sensei with dojo who are strict Shinto'ist, etc. tend to have one at the entrance as well although I am unable to confirm. 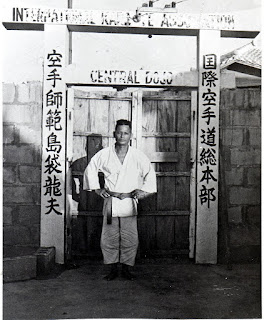 Note: It is a theory that since karate training is also performed at shrines and burial places that they naturally created the same environment with the torii gates, etc. 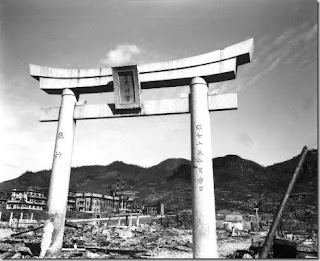 This one is remarkable as it is the only object that remains after either the Hiroshima or Nagasaki atomic bombing that ended world war II.

Posted by Charles James
Email ThisBlogThis!Share to TwitterShare to FacebookShare to Pinterest

Monkey on Soapbox - Danger Will Robinson!